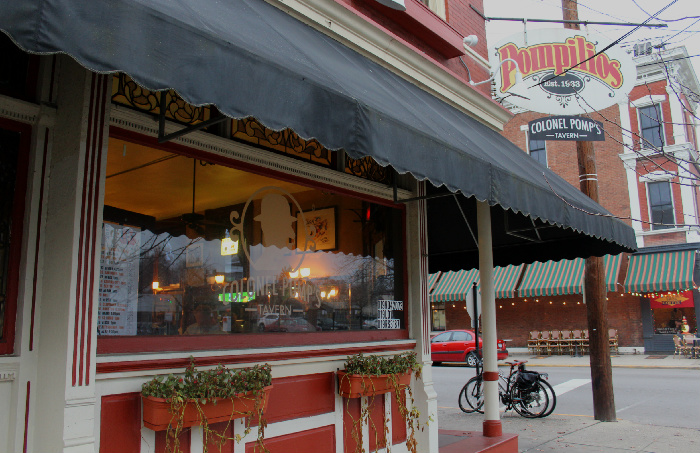 Pompilios in Newport, Kentucky has been serving customers since 1933

Along with seeking splendid donuts for a donuts to drive to magazine article I wrote in December, I recently ate my way around Ohio for an article on restaurants in Ohio that made it into the movies. Yes, Ohio does have some.

With Oscar season upon us, here is a nod to Pompilios, the setting for one of the most memorable restaurant scenes in an Oscar winning flick. I did have to cross over the Ohio River to Newport, Kentucky to get there.

When Raymond, Dustin Hoffman’s character in Rain Man dropped the box of toothpicks all over Pompilio’s floor in Newport, Kentucky, he knew exactly how many scattered-246. If you watch the scene, you’ll get a good glimpse of Pompilios’ interior. The tiled floors and long wooden bar are distinctive features of this building that first operated as a saloon in 1901. Tom Cruise’s character Charlie and Hoffman’s Raymond were next to the bar near the doorway of the original dining room when the toothpicks spilled.

Pompilios, along with serving up stellar Italian fare,  serves up Rain Man loving. Framed movie stills, a large sign with cast signatures and an appliqued mural of Rain Man scenes shot in Cincinnati are part of the decor. Toothpicks are included in the mural’s design.

The Italian Sampler is touted as a Rain Man cast and crew favorite for good reason.

The menu also has a Rain Man nod. The Italian Sampler –a combo of ravioli, eggplant Parmesan, Italian sausage, lasagna and a meatball is touted as a cast and crew favorite. I give it a thumbs up, particularly when paired with a local brew. Bread and a tossed salad are included. To top off a meal, try the homemade cannoli, a treat of cream filled pastry drizzled with chocolate. 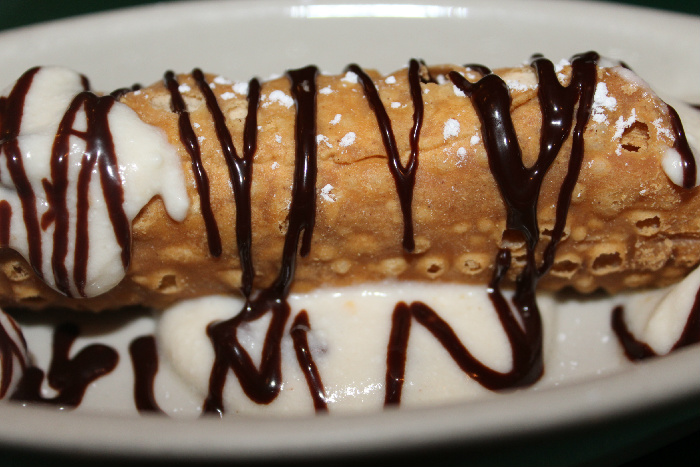 The cannoli is another Pompilios taste treat

Pompilios drink menu is extensive, and its bar–Colonel Pomp’s Tavern,  draws in a crowd as well. Along with its Rain Man fame, Pompilios has notoriety as the first bar in Kentucky to serve alcohol when Prohibition ended.

By the way, in 1989, Rain Man won four of the eight categories for which it was nominated. The golden statue went home with: Dustin Hoffman for Best Actor; Barry Levinson for Best Director; and Ronald Bass and Barry Morrow for Best Writing Screenplay Written Directly for the Screen. Rain Man also won Best Picture that year.