I am a movie goer. I am such a movie goer that every year I make it a mission to see every movie nominated for an Academy Award in every major catagory. I even see the Oscar nominated shorts–all of them. For me, movies have a multitude of purposes from escape to pure entertainment to teaching us something about life. 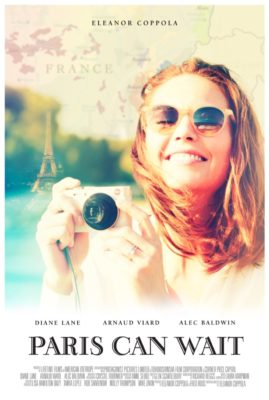 When I saw Paris Can Wait at the Gateway Film Center in Columbus, Ohio this past week I found myself captured by the charm of this lushious road trip movie and remembering the pleasure of great food and allowing oneself to go with the flow when one travels.

In a nutshell, the movie is about a woman (Diane Lane)  who is married to an American movie producer (Alec Baldwin) but who is unable to get on a plane to Budapest with him because of ear trouble. Instead, she goes to Paris with a French business colleague of her husband’s (Amaud Viard) via the collegue’s Peugot. Her husband is to meet her in Paris when he is finished with his work in Budapest.

Regardless of the story’s main plot–which I thought was charming, the journey through France is a delight –and a reminder that any road trip worth taking involves detours, stops at places you might not pass by again, and seeking out the must-have local cuisine.

Lane and Viard ate their way from Cannes (where they started) to Paris in a journey that lasted three days. Without the stops at fabulous restaurants and spectacular sights along the way, the trip would have taken seven hours. Instead, the two feasted on picture perfect French cuisine accompanied by fine wine, cheeses and chocolate. When Lane’s character balked at the bounty, Viard advised, “Just eat what you wish.”

As Lane licks three ice-cream cones at one stop because it’s impossible to chose between three flavors, I was reminded of my own difficulties of deciding which flavors of gelato to order in Italy. It is possible to buy more than one. If you can’t eat it all, don’t worry about it. Eat what you wish–no more. no less. What might seem like wasting food could be not letting an opportunity to savor something splendid pass you by.

Also, stopping to enjoy a specific site that holds significance is perhaps more important than arriving at one’s destination. The two make a stop in Lyon at the magnificant  Musée des Tissus et des Arts décoratifs (Fabric Museum), and other stops at Roman ruins and at a cathedral. Each were spur of the moment choices that enchanced their experience through textures, colors and history. Some of my most memorable moments in my travels have been when I took the time to wander off the main highway even if it meant a later arrival time at my final destination. The Enchanted Highway in North Dakota was one of these experiences.

Throughout, Lane’s character took intimate photographs of what caught her eye. Her technique works–close ups and partial images can be both evocative and aesthetically pleasing.

Eventually, the two do arrive in Paris with nothing gone awry despite the extra time they took to get there. As Viard’s character remarks, “Driving is the only way to see a country.” In general, I have to agree.

Directed by Eleanor Coppola, Francis Ford Coppola’s wife, Paris Can Wait is a lush way to spend an evening. If you don’t think about every great bite you’ve ever eaten or a wonderful side trip that you took one meandering day, alter your travel plans. Your memories will thank you.